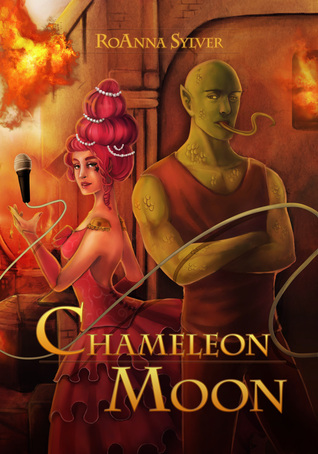 Before I get into my (hugely delayed) review of Chameleon Moon by RoAnna Sylver I have to talk about how I found this book first.

I’m a big fan of tumblr, specifically, I enjoy wasting time on tumblr. It’s a great source of procrastination. Sometime in early 2014 or late 2013, I saw a post go around with a picture of our friend and author RoAnna Sylver literally on the floor, unable to get up because they just received word of their manuscript, Chameleon Moon, being accepted by their publisher. And I was knee-deep in revisions on my own book, and what Sylver just experienced was exactly what I wanted and probably how I would respond (except probably with plenty of screaming too). So, excitedly, I followed Sylver’s blog and waited until October 2014, when it would be published.

I didn’t just follow Sylver’s blog because they had what I wanted. I was incredibly excited by this book’s release because of how they described it: a book where there was so diverse a cast that there was not a single straight, while cissexual character, which is so prevalent in all books. (Of course, there’s nothing wrong with straight white cissexual characters in fiction. But when that’s the only flavor of character you can have, you get pretty tired of it pretty quickly.) The book doesn’t shy away from mental illness or disabilities, especially when a core point of the plot centers around a “miracle” drug that supposedly can cure anything, nor does it shy away from gender and sexual identities of the wide cast of colorful characters.