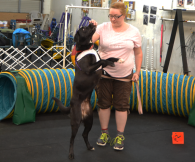 During this last class we worked with dogs off leash–a little. And to my surprise, it will always be a surprise, Belle did not run away from me.

We only worked off leash with the weave poles. But let’s back up to the beginning of class. 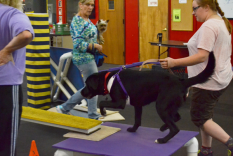 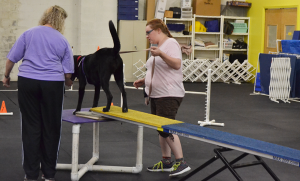 Belle’s turn, she jumped up on the table, ran across the teeter-totter/see-saw, not caring at all that it moved, but didn’t stop in the contact zone. Instead, she ran to the other pause table and sat down.

By the end of our time with the obstacle she was at least stopping in the contact zone.

We moved then to the dog walk and Belle took this at a light jog. Quicker than the walk we’d been doing it at but not as fast as her gallop on the A-frame. She did very well on the dog-walk, as did all of the dogs and so our class then switched sides of the room and instructors.

Next we went after the A-frame. AKA Belle’s favorite thing in the whole wide world. Belle and I took this at a full speed run and Belle actually stopped at the bottom the first time! 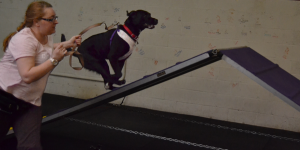 And the second time! Not the third time… but the fourth time! After the fourth time, Belle was so happy when we celebrated that she jumped at my face and licked me from my chin to my temple. Sooooo much slobber…

From there we moved on to the weave poles, which I mentioned some of us did off leash. Belle is just starting to understand what she’s supposed to do here. I might be cheating a little. A little. We aren’t supposed to lure the dog, meaning we don’t stick a treat in front of their nose and hope they follow, so when she comes up to the weave pole… I nudge her with my hips in between the poles. Otherwise she walked right past them.

The title of this post is “The Last Class.” And it was as far as the research for this project is concerned. BUT–now I’m addicted. It’s like when I got into archery.

Do it once and continue to do it for the rest of your life. FOR FOREVER!

So I signed Belle up for another 8 weeks. Our bond has improved so much over the class and I realized a lot of things while I did all of this research, not only about training Belle but about myself as well. 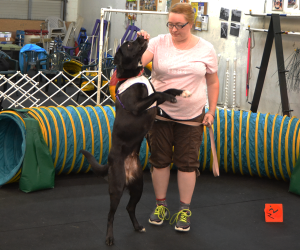 If you haven’t found it on the website anywhere: I have three anxiety disorders. And you know what? Sometimes they get in the way of my life. Not always, but just enough. I have Generalized Anxiety Disorder, Social Anxiety Disorder, and Panic Disorder.  I refuse to medicate myself for these ever again. I was on medication for 6 months when I was in my early 20’s and it is 6 months of my life that I barely functioned and that I cannot remember. 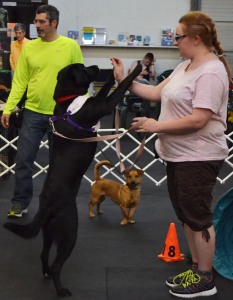 So I noticed, as much as new people scare me, as much as being somewhere new, and trying something new scares me, being near Belle made that much easier. Also having a friend with me (either Maggie or Kiel who recorded this project for my vlogs and took photos) helped a lot. So I’ve made the decision that once we’ve completed this next agility course, and our bond grows even stronger, I’m going to register Belle as an emotional support animal. I imagine this will do wonders for me in the coming school year.

As for the project that I’ve put together:
I wrote a 50 paged graphic novel. Rather than write a manual about dog training, I used each agility obstacle as a metaphor for real obstacles presented to me by my disorders: the A-frame is my high blood pressure from panic attacks, the tunnels are every stressful situation which cause me to have attacks, the dog walk is my social anxiety in which I feel I don’t have enough room, the jumps are every day expectations that always seem to pile up.

But don’t worry, there’s a happy ending–Belle actually goes through the tunnel! 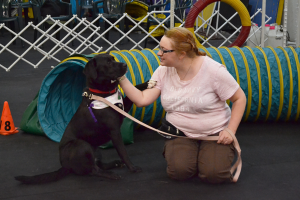