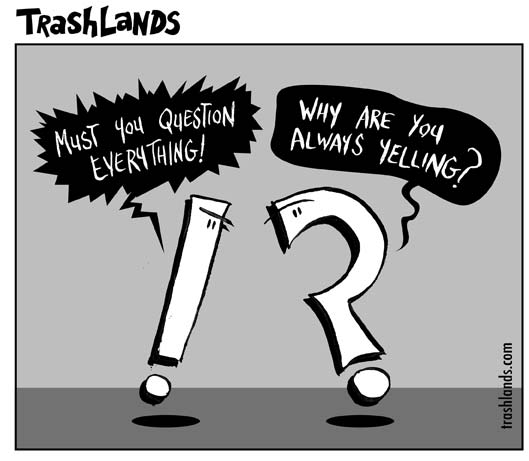 Maybe you’ve seen the “Let’s eat Grandma!” example, maybe you know about the strippers named Hitler and Stalin, maybe you think commas are like sprinkles and they make your ice cream-like writing taste better and look pretty. Who knows. Perhaps you’re one of those overly excited writers!!! You know, the ones who like to put multiple exclamation points after their sentences!!! Or maybe — just maybe —  you learned one day that there are two –count ’em two — types of dashes and you think it’s — like —cool to put them everywhere in your writing to replace all those — frankly useless — commas. If any of this applies to you: this writing tip is for you.

The best writing advice I’ve ever seen about commas is from Keith Waterhouse. He says “Commas are not condiments. Do not pepper your sentences with them unnecessarily.” I’m not a big fan of pepper, so I like to think of them like sprinkles. Imagine you go to the ice cream store and get yourself a nice soft serve cone (it has to be soft serve for my metaphor). You ask for sprinkles and the guy behind the counter just dips your whole cone into the canister of sprinkles and covers your cone in sugary goodness. Then you bite into it and you realize that there are too many sprinkles on your ice cream. In fact, it take about 5 licks just to get past the sprinkles to your soft serve.

Imagine if you did that with your writing. Commas are there for clarity. It would be very hard to read a sentence in which there is no punctuation to indicate a pause or separate the nouns verbs adjectives and adverbs because the mind wants to take breaks all the time but here we are just rambling on and making no sense at all. Get my point? Some images have been floating around with humorous examples about the misuse of commas. “Let’s eat, Grandma/Grandpa,” versus “Let’s eat Grandma/Grandpa” notes that without the commas you are, in fact, eating Grandma/Grandpa. That’s just one instance of clarity. 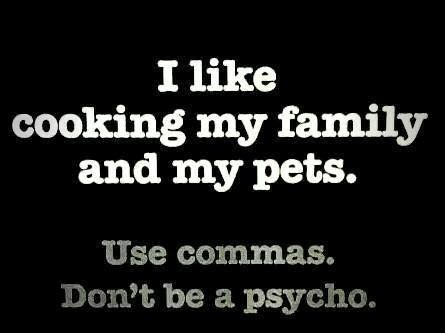 The first sentence (with the comma) means the speaker is addressing Grandma/Grandpa.

Commas are also used to separate list items. You use commas to separate lists with three or more items. This is for a few reasons. One is in the image to the right: “I like cooking my family and my pets.” Yeah, you know what? If you do actually enjoy cooking your family and pets, you are a psycho. Chances are that you actually like “cooking, your family, and pets.” So let your readers know that these are separate interests.

The most clarifying comma is the Oxford Comma. Some styles (cough, cough, AP, cough, cough) do not use the Oxford Comma, so always make sure to check your style books, but that’s silly because of how much confusion comes from the combination of elements and the creation of asides.

One final note about comma usage, and this one is from my own experience, if you don’t know where it goes do not put one every where. Years ago, when I was an education major, I taught a lesson about using commas in a series to sixth graders. The next day they had a test about comma usage and let me give you some examples:

On a nice Fall day I enjoy rolling in leaves with my sister brother and dog.

On a nice, Fall day, I enjoy rolling, in leaves, with my sister, brother, and dog.

On a, nice Fall day, I enjoy, rolling, in leaves, with my, sister, brother, and dog.

I wish the last one were an exaggeration. It’s not.

There are two types of dashes: the en-dash and the em-dash. FUN FACT: They are named for the typeface’s length of the letter n and the letter M. Exciting! Some will say that both dashes indicate a pause — why don’t we just toss that idea out the window for the sake of clarity. The em-dash (–) is for longer pauses, and can substitute for commas, when creating an aside, and parentheses, for the same reason. The en-dash (-) is also for pause but replaces and or to. For example, “The war lasted from 1812 to 1912.” can be rewritten as “The was lasted from 1812-1912.” Another example would be “The war was fought on the US and Canadian border” which can be rewritten “The war was fought on the US-Canadian border.”

When I was in high school, I had a teacher to who hated exclamation marks. She they took away from the flavor of the piece. “But,” I exclaimed. “What if something is exciting? Or my character exclaims something?” She responded, “Then show it.” After my further arguments for the exclamation mark, she said “Every time you read over an exclamation mark say Dun dun dun dun! in your head.” Now I can’t get that advise out of my head. 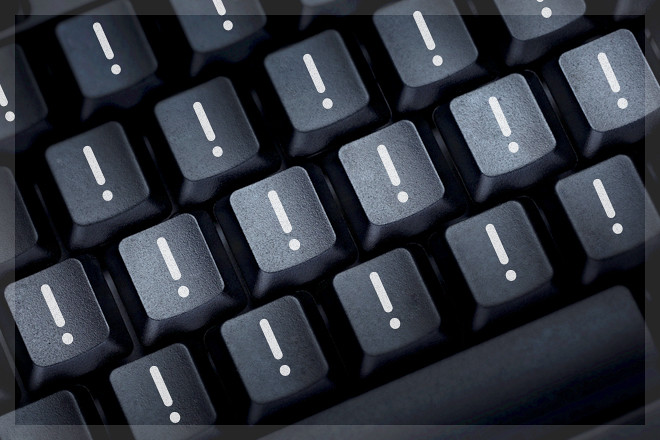 SPECIAL NOTE: While I am pursuing my Masters degree in Writing I have decided to re-post my Writing Tip Tuesday posts in order to help keep content flowing and my workload lowered. As always-if you have a question about writing or an issue you would like me to address feel free to email me about it at JessicaMary87@gmail.com. Thanks for following!