Yes, it’s another poke-post. But this one is all about Eevee and what the eeveelutions say about you.

In all the pokemon games, spanning all six generations, the most coveted pokemon, even more so than any legendary pokemon, is Eevee. Because Eevee will evolve into one of eight different eeveelutions.

The eeveelutions come in all shapes and colors. Eevee, in its base form, is a

type pokemon. It is brown and tan. In a previous post titled “Circles, Squares, and Triangles… Oh my…” I talked about Chris Solarski’s article which dealt with the psychology behind 3d shapes, in which Solarksi details the psychological reaction to the three basic shapes: circles, squares, and triangles. Our reactions to these shapes are based on our experiences with these 3d shapes. If someone throws a ball to you (assuming they don’t beam it at your face) and you catch it it doesn’t hurt the same way a cube or a star might because of the edges. 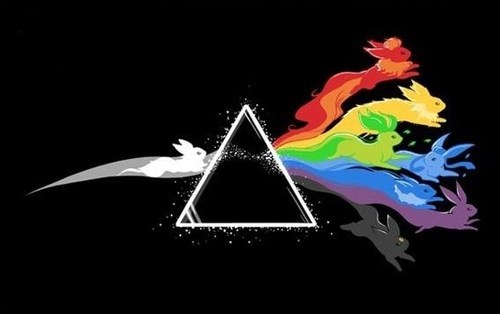 In “Sack Things and the Self” I talk about Tegan Harris’s article which talks about the six selves which are represented  by video game avatars. Harris says that one of six selves are represented by the avatars we choose to represent us: the true self, the heroic self, the powerful self, the fantasy self, and the random self. The true self is a representation of player’s perception of herself; the heroic self is similar to the true self but only shows all positive or all negative traits; the powerful self is designed to be effective within the confines of the game; the fantasy self represents the true self but shows “aspects of the player… that are completely [unfeasible] in the real world;” the random self is not built toward any goal and only serves to be an interesting choice for the player.

And I’m reiterating all this information because we’re going to talk about all of it–with regards to eevee and all eight eeveelutions.

eeveelution. Much of Vaporeon’s body is made up of circles with a few triangular accents. Vaporeon has a generally safe shape with small warning signs that it is a force to be reckoned with. Blue, Vaporeon’s body color, represents calm and untiy (and also

). Many offices are painted blue because the physiological response is one of tranquility. Vaporeon is a symbol for safety and calmness. It represents the true or heroic self of someone who seeks to be around calm scenarios, be in safe situations, and anyone who wishes to avoid conflict.

eeveelution. Its body is made up of many triangles. It is a dangerous pokemon. Yellow is the color of happiness, friendship, and change. Yellow is also a color that represents warning. White is the color of purity and beginnings. Jolteon represents the true, or heroic, self of some one who is friendly and willing to accept change. It also represents someone who is outgoing and enjoys undertaking new projects.

eeveelution. Red is the color of passion and power. The color red actually makes blood pressure, pulse rates, and even your rate of breathing increase (aren’t colors fun!?). Symbolically, the color red is associated with life, desire, and masculinity.  Just like Vaporeon, Flareon’s body is made of circular shapes with few triangular accents; he has a safe shape. Flareon represents a self that is masculine, or outward, strong and passionate. The extremes to which red is usually associated with makes me think Flareon is better suited to represent someone’s heroic self more so than the true self.

eeveelution Umbreon (black) and the

eeveelution Espeon (purple), must be analyzed together. They were always portrayed together in advertising and are still together in many pieces of artwork. In the Pokemon fandom, Umbreon and Espeon are a symbol of friendship. They represent a strong and unique emotional bond. Both have rounded bodies with few triangular
points. Umbreon is black with yellow accents, but is often featured with its shiny coloring: black with blue accents.

Although black is often associated with negative traits, like death and evil in general, it is also a symbol of strength and elitism. Black can enhance the colors it accompanies. In his non-shiny form, Umbreon has yellow circles and stripes. Yellow, as mentioned before is a representation of friendship and happiness. In his shiny* form, Umbreon has blue circles and stripes. And blue, as was also mentioned before, is the color of calmness and tranquility.

Umbreon, all on his own represents a calm and strong friendship. It is a safe and comfortable relationship. Espeon also signifies these things. Espeon is purple, the color of all things mystical, intimacy
, and emotions. What wonderful things to have in a friendship. Together, Umbreon and Espeon are a unique, strong, intimate friendship.

eeveelution. He has many triangular points on his body shown as cuts in leaves, the tip of leaves, and what appear to be thorns on his body. He is both green and a very light yellow. Green is the color of growth, nature, and change. The color expresses consistency, firmness, and persistence. Leafeon is the
true, or heroic, self of a person who who does not give up, stands up for what they believe in, and adopts routines.

eeveelution. It has many triangles: its ears, its tail, its…bangs… even a diamond on its back. Unlike Vaporeon, who was mostly circles, Glaceon has many points making it a dangerous shape (according to Solarski any way). Like Vaporeon, however, Glaceon is blue and represents the same qualities of calmness and tranquility. Glaceon represents the true self of someone who is out and easy going. And because I can’t resist a good pun: It represents someone who is cool,

Sylveon is the fairy

eeveelution. Personally, I think it looks creepy. Not the point. Sylveon is many colors: pink, white, blue, and even a little purple. Pink is the color femininity and gentleness; white, blue, and purple have all been discussed before but let’s recap:

Sylveon is the true, or heroic, self of some one who is timid or gentle, enjoys new things, and is in touch with her emotions.

Every eeveelution can also serve as a representation of the power or random self. Many players breed Eevee in order to have all of the eeveelutions in order to better play the game by having all types of pokemon.

*Shiny Pokemon are colored differently from their normal appearances. They are very rare to find within the games.